Yesterday my mom and dad watched Annie for me and I was able to play with my horse in the afternoon — after taking loads of pictures of the lambs, trying to update my website….

I took Sunnie over to my friend Dixie’s house for some desensitizing exercises and she has a very scary home with lots of action.  Sunnie was turned out into her arena for some bonding time with her mustang Otter (one of the ‘original’ Extreme Mustang Makeover contenders who went to Fort Worth, TX a couple years ago.)  They got along pretty well and I was impressed with how nice Sunnie was, I wasn’t sure considering he was a stallion for five years of his life — on another note, did you notice I’ve officially found my real self, yep, I’ve named myself “Little Sure Shot Photography, after Annie Oakley’s nick-name.

Otter is an absolutely stunning horse, and the major plus is that he doesn’t have a mean bone in his body.  I really really like him, he’s a definite favorite of mine in the equine world. 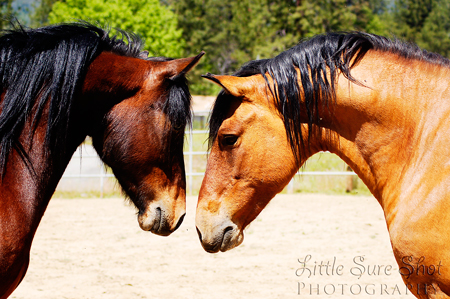 He’s very gentle around other horses too, I think that’s one reason Sunnie wasn’t threatened at all.  Sunnie is a very gentle horse too, but I wasn’t sure how things would turn out… You never know when a horse used to know what hormones felt like.

After the romp in the arena, Sunnie went into the round pen to start Dixie’s School of Desensitization — this is where Dixie really excels in horse training.  She can get any horse to accept various “scary objects.”  The noodles are a great idea because they fall apart quickly if anything remotely dangerous should happen.  In fact, there were a couple on the ground that Sunnie broke in half just by stepping on them as he trotted around the ring.

It wasn’t long before he was testing out the noodle ring for himself.

The ball was the scariest object for him to get over.  He’s still not completely sure of it, but before long, Dixie will have it bouncing off his whole body without a flinch from Sunnie.  Otter gets it bounced off his face and doesn’t bat an eye.

Today we attended a  little clinic that Dixie hosted at our local arena where we learned about colors of horses, body condition, different feeds and other educational horsey things.  I was told to bring two of my horses for their coloring as it is so different and many people get them confused with buckskins.  We had a great time playing around with the horses.

This is the daughter of a friend of mine with her little 18 year old Hackney pony.  He is such a good little pony for her and she is doing wonderfully with him — a definite little cowgirl there.

This is “L’s” little sister, “J.”  She posed with a lady who brought her quarter horse mare and couple weeks old colt.  The colt had enough for the day and lay down for a snooze.  Notice all the curious horses in the back?  The two on the left are mine, Otter is on the right… Looks like they all wanted to be in the picture.

Have a good weekend! 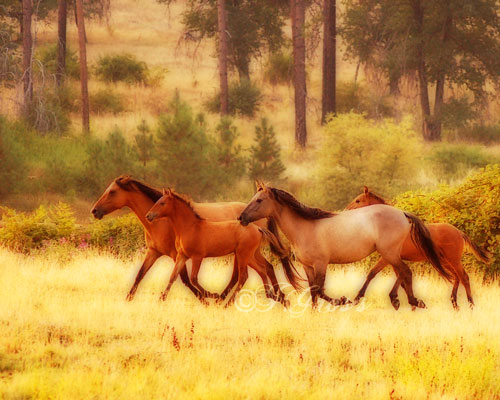 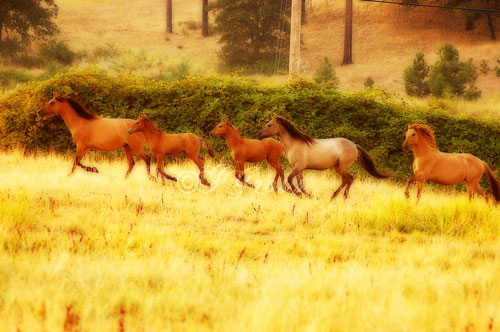 Now that was some fun evening light, and blended well with the Orton effect.