So you call yourself a Tree Hugger

Let me guess, you live in the concrete jungle, you grew up fairly spoiled in a nice track home with air conditioning in the summer and forced heat in the winter.  You never really saw a different season until you moved out to what you call the “country” where you live on 1.3 acres which is surrounded in white vinyl fence and is located behind some gate posts that perch themselves on either side of the road in a community called “Such and Such Ranch.”  You drive a hybrid vehicle so you feel like you’re saving the planet and scoff at those who drive Ford diesel pick-ups with a nice coating of dust.  Little do you know, it’s that person driving the dirty Ford that is the true Tree Hugger, if you want to call it that.  He makes his living logging in the forests and understands what renewable resources mean.  He cares deeply about how the forests are harvested and cared for and that when a wild-fire blows through the tall pines that the scorched trees must be harvested before the bugs set in.  If bugs set in then all the living trees around the burn will also be compromised and will most likely be dubbed “bug kill” before the year is out.  When bug kill takes over a forest not only do you have dead trees but you also have millions of match sticks lining the once scenic mountain sides just itching to get a small flame started which would erupt in to a devastating catastrophe.  Not only does the guy driving the Ford diesel know about forests, but he also raises animals and cares deeply about their welfare.  He has to deal with real life and sometimes has to see suffering and then make the hard decision to end a life.  He decides what is meat and what is breeding stock.  Which animals are to go on living and which animals should be properly put down.  Sometimes this guy also has to do the “putting down” himself, and it eats him up inside but he does it anyway for the good of the animal.  He knows where his food comes from and where the leather of his belt is from too.  His horses and dogs are his best partners.  His dogs chase varmints, herd sheep and cows, and ride in his pick up truck.  They are fed well and treated as part of the family.  His horses are well fed and watered, cared for after a long days work of sorting cattle or checking fence lines.  They’re fed quality hay and treated kindly.  They babysit his kids and graze the clover in the yard while the cool of a summer’s night sets in.  These things — The trees, the animals, they are his living.  They are what makes him tick, if they don’t thrive then he won’t thrive.  He cares more for these things than any paper pushing cubical sitter driving the hybrid car sipping Starbucks and toting the designer bag.    They are his way of life and he lives it every day, the good and the bad.

It was a long night last night, not only was the moon shining brightly but our dogs were barking incessantly.  I had wandered out in my bare feet with pajamas on shining our LED MagLight around.  I had  noticed the rams were in a bunch to the right of me and the ewes out in the big pasture were in a bunch on the hill.  Just a little after I scoped things out, tip toeing on our shaled drive way, I made my way back in to finally fall back asleep.  I hadn’t seen a thing but knew our dogs were upset, I figured a pack of coyotes had moved through.  In my sleep, I remember hearing the thundering of horse’s hooves at one point but didn’t wake enough to go out.  Hubby said he heard the twang of a fence being jumped and assumed it was by some local deer coming in to chew on our newly planted fruit trees.

Moving right along, I did my normal morning chores threw some hay at the “dudes” (rams) and was going to pull my truck forward to park the horse trailer that was still attached.  I then thought to myself that I’d better weed-whack the spot where the horse trailer was normally parked before putting it there so decided to leave the truck and trailer where it was.  Annie was playing around as I was thinking this all through until I announced that we should get in to Mommy’s Rover and go borrow Papa’s weed-whacker.  We jumped in the Rover and set out for Hubby’s shop which is just across our main town’s road on an adjoining piece of property.  I poked my nose in to tell Hubby where we were off to and noticed that our Pastor and his wife were visiting.  We hung out there instead of going to Papa’s and then after the tour of the shop our Pastor expressed that he’d like to see our barn.  We set out for home in my Rover, kind of like we were on safari, but didn’t know it.

My little Rover has a set of four jump seats in the back and three seats in the front.  Annie had the passenger, I had the middle, Simon was driving and our Pastor and his wife Barbara were in the back.  We cruised home, parked in front of the house and were talking right there in our drive.  Our dogs, who were still on high alert, came over to greet us quickly and as soon as they came by our sides something very large jumped out of the big pine between us and the ram’s pen. 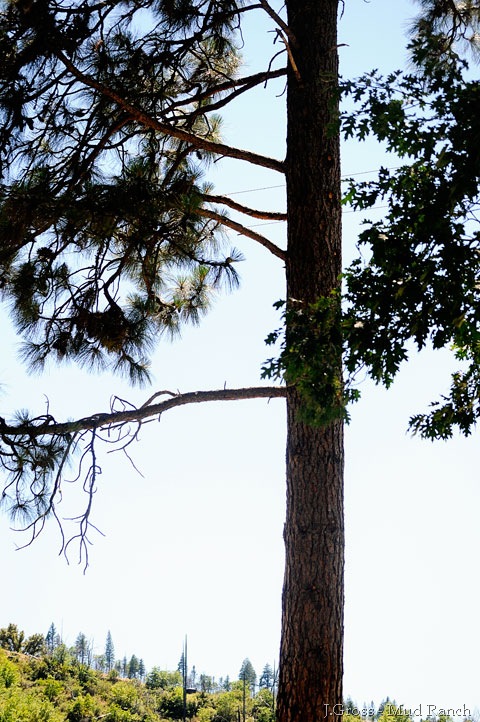 My truck and trailer, being parked in front of this tree blocked our view of what was really going on.  We ran around the back side of the trailer only to see a Mountain Lion running as fast as she could but ran in to the fence.  She then followed the fence around which brought her right back toward the house.  She then leapt up in to a smaller pine where our dogs stood at the base barking. 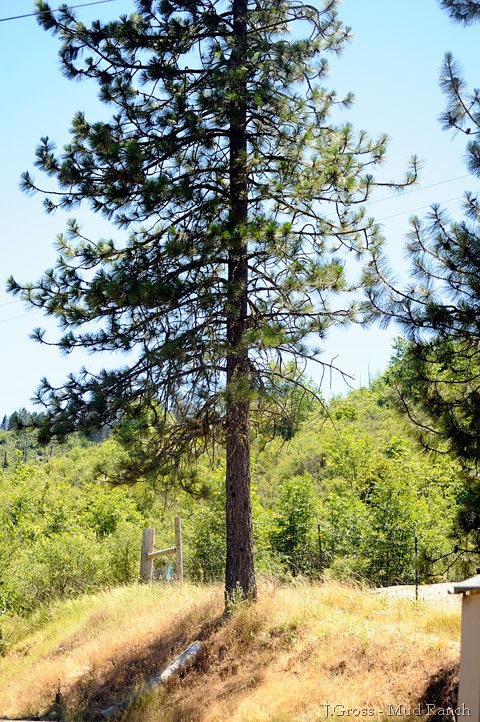 She peered out at me from the second set of branches up, growling and glaring.  The dogs stood at the base of the tree and weren’t letting her down.  I kept telling them what good dogs they were and was hoping and praying that their presence along with mine (and my yelling) would hold her there.  She stayed and growled.  Hubby ran for a gun and came back.  She was shot quickly and accurately but the blast knocked her out of the tree.  She fell quickly and with adrenaline pushing her she ran past me toward the house where Barbara and Annie were staying “out of the way.”  As it turns out the Mountain Lion was running right toward them!  Barbara scooped Annie up in to her arms as she ran around the other side of Hubby’s Rover and held Annie close between it and herself.  The cat went speeding by on the opposite side headed for our wood shed.  Hank, our collie, was right on it’s tail barking the whole time and Abby, bless her little pea pickin’ heart, headed for the culvert to hide in because she hates gun shots. 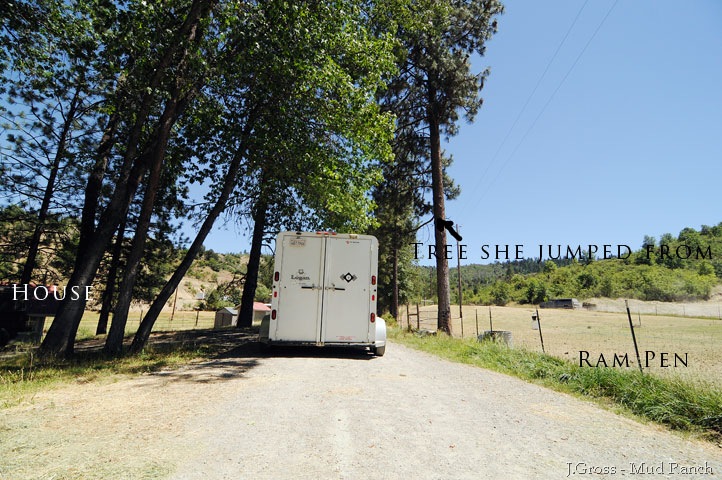 Here’s how close things really were.  The large pine to the right of my trailer (truck is still hooked up and right there next to that tree) is where she jumped out of while we stood on the left side in the shade talking.  She ran straight to the right once she jumped out and ran in to the opposite fence of the ram pen then curved around back to the left. 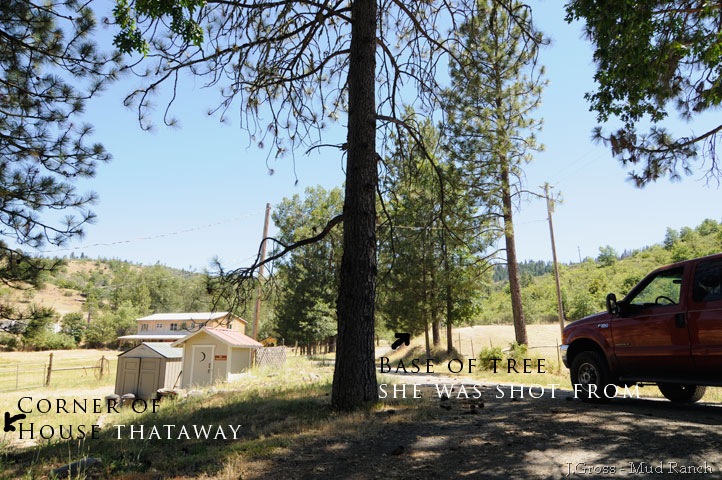 The corner of the house is literally right out of the picture.  The little house there with the moon on the door is our pump house and there’s the truck right next to the trailer.  This is about where we were standing when she jumped out of the tree and also about where I was standing bare footed in the middle of the night shining a flash light around.  Barbara and Annie were standing just a little further down the hill when the cat was shot and when she came tearing at them. 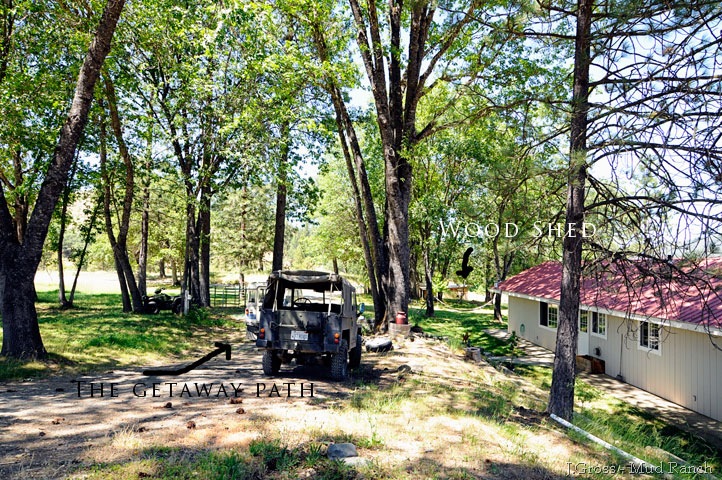 And here’s the little Rover that Barb and Annie hid behind as she zoomed past.  There’s the wood shed she actually fell at with Hank on her the whole time.  All right here, out my front door.  As a friend on Facebook mentioned, it’s like the Wild West!

And here’s this year’s Christmas Card.  This is about where she fell, just behind the woodshed.  Hank didn’t like her dead or alive and was pretty serious about it too.  We’re so proud of our dogs and were very protected as far as that cat dropping and running.  The Game Warden made it here this afternoon and said that it’s about a two year old female, excellent condition and around 80 lbs.  She was large.  He also said that normally when they shoot they aim for the head so that it’s a sure quick drop but Simon was thinking to shoot like you would a deer in the heart/lung/liver because it’s a larger area to hit and more of a sure shot.  He certainly didn’t want to make her mad.  The Game Warden said that we were lucky that when she fell she just ran away and didn’t attack our dog or anything else near by (me!) because normally they land fighting.  I am thankful that we were being protected and thank God for that.

And just so I don’t sound so cold hearted, I do think it’s sad that she had to be shot but in my mind there was no other way.  She was very much in our territory and very much hunting our sheep and posing a huge threat to us.  This was a very serious situation that I’m glad ended happily for us humans involved.  A big cat is nothing to take lightly and the Game Warden confirmed my comment that if we’ve seen this many in six months time, how many are we not seeing?  He said yes, they’re much like mice… If you see a few, there’s probably a lot that you’re not seeing.  Amazing. 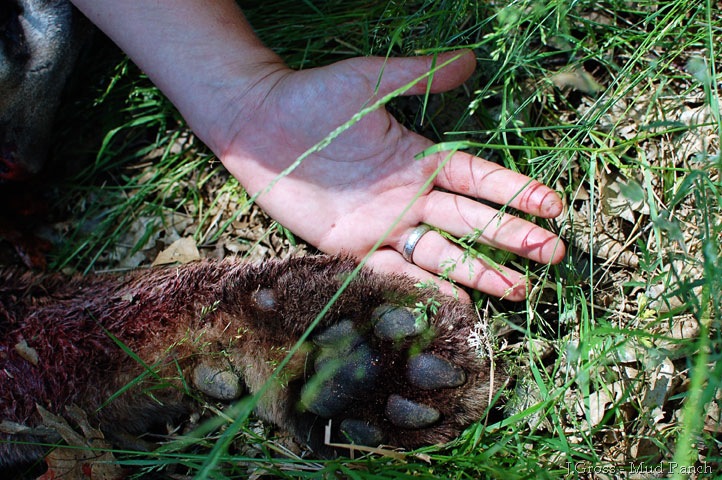 My hand and hers for comparison. 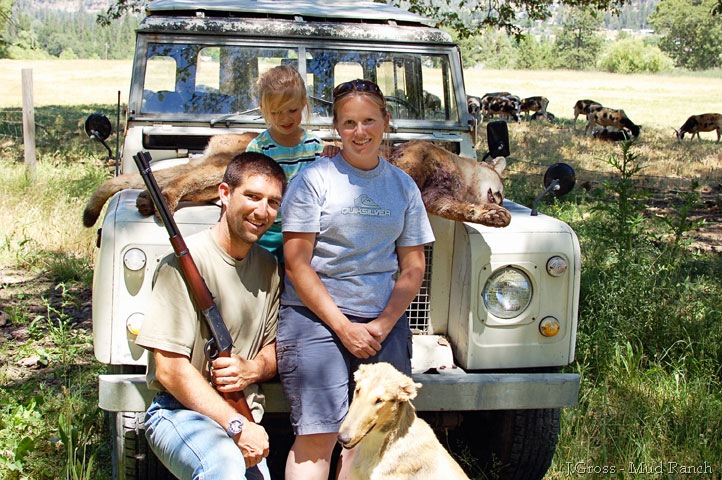 And the “safari photo” with my Rover – note our grateful sheep in the background.

A special Thanks to Curtis for the photos.

Posted in LGD, Life Lessons, Nature, The Cats, The Dogs