My iris are blooming all over the place but unfortunately, the beds are a mess so they’re hard to see amongst all the weeds.  The beds haven’t been mulched in a long time, and I don’t think they’ve been weeded in years either (new place for me, remember!) but amongst all the weeds are some beauties.

I think I like this one the best, so many different colors!

Lots of these electric blue ones!

Being a big fan of the color yellow, in general, I like these a lot too. 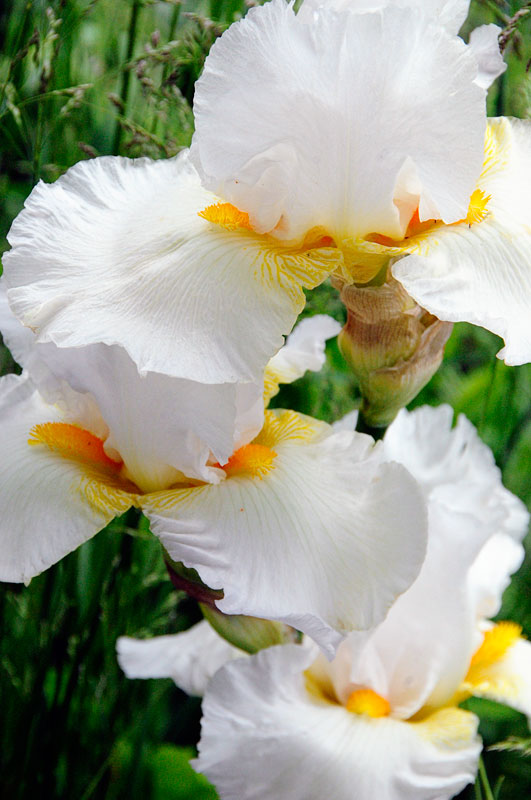 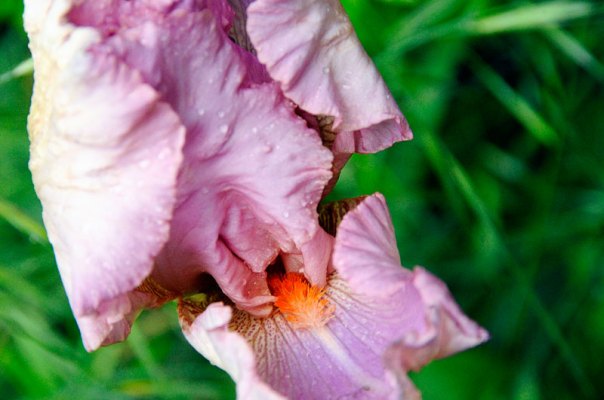 And as the Iris continue to unfurl…

…Along come the peonies.

Two things that I’ve never liked, are now residing here.  First, geese (I was raised with and attacked by geese) which I swore I’d never have — and now chickens which I have very willingly let my mother-in-law have the monopoly on in the family.  I’ve never been a person who liked birds all that much — sure, grandma’s parakeet was fun but to have my own?  Well that’s something I never really saw coming.  But so far, I’m enjoying it.  The geese are only two weeks old and already mowing the grass like no one’s business, and their hind end is also contributing to the fertilizing around here.  It’s also fun to have them follow me around while I garden and putter outside.

And because chicks are so fragile (unlike geese) we picked ours up from the post office and took them straight over to some dear friends of ours, the Holdings, so they could have a warm safe place which was prepared for them and around 100 of their closest friends scheduled to arrive next week (this is for many people, all on one order.)

What amazed me right off the get-go was their inability to see that they need food and water.  The geese were instantly ready for sustenance, but the chicks were still confused about the whole issue.  I sprinkled some feed on the floor of their pen and they started pecking.  They were very lost on the water issue and it took many introductions of water on a finger tip then put on their beak – back and forth until they figured it out on their own.  Finally they did, and we all rejoiced.

This is Lefty – he was partially squished by the heating pad in the box.  When I opened the box I saw all these moving chicks and quickly assumed they’d all travelled well.  Then I noticed little limbs sticking out from under the heating pad and thought for sure we’d lost one.  To my surprise, Lefty was still alive and kicking though a little squashed.  His right eye was a little strange looking and his fuzz was flat and he couldn’t walk – just kinda spun in circles.  So while we unloaded the chicks and taught them to eat and drink, I put Lefty in my jacket to keep him warm (I say HIM, but I have no idea… He just looks like a He to me.)  I noticed that he moved around a lot in there and had a chirp-chirp that wouldn’t quit.  So after about a half an hour I tried setting him down again in the pen with the other chicks and he seemed a little more stable but still fell to the left.  I picked him up again and taught him to drink and he drank a lot.  After holding him for a little while longer I set him down again and he looked as though he regained strength!  Yippee!  Just before I left I checked on Lefty again and he was almost unidentifiable compared to the other chicks, except for a little stagger here and there.  Thank goodness I picked hardy chicks, and the update today (two days later) he’s doing well and is strong!

Lefty is a Golden Campine, his gray/black  friends with the yellow faces are Colombian Wyandottes, and his red headed striped friends are Welsummers.  I bought three hens from each breed, except the Campines which I got three hens and a rooster… So Lefty really could be a “he” after all.  Next week are the Aracaunas and the meat birds – soon I’ll have a field full of bug eating, egg laying friends.