Before I get too involved in my tales from yesterday, I wanted to say that the photos I posted in yesterday’s Photography Show! post were of the gallery itself and not the ones I entered… though, the last one was a contender down to the last minute.

Anyway, the critique went really well.  It was very interesting to hear what the judge liked about certain photos and what he didn’t.  So many things he said were something I subconsciously liked or disliked but couldn’t put it in to words so it was really nice to hear them put in to words.  There was one photo that was a detailed picture of some moss growing on a rock or a log, not sure which.  Anyway there was a natural line that took off from the lower right up to the upper left and it naturally lead your eye straight away from the photo and out in the atmosphere.  The Judge asked the artist (at the artist’s request – he wanted to know why that picture wasn’t chosen to be in the gallery show) why he took the picture?  The photographer had no answer, so I think that is a very good thing for me to ask of myself with each picture I take. 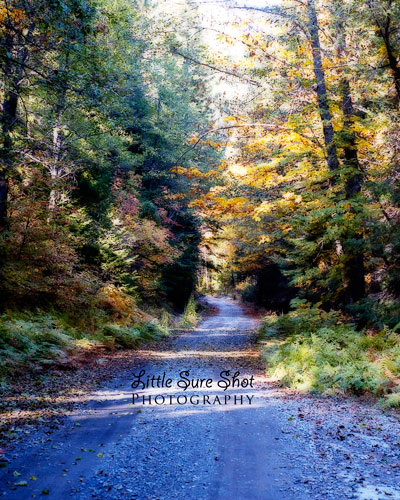 This was one of the chosen photos which will be hung in the gallery.  I will take pictures of my two out of three that were chosen on the 7th of November at the Reception for the Artists.

Anyway, thankfully I had an explanation for both of mine that were accepted, even if it is just for myself.  The above was the pretty fall colors, the light filtering through the trees and the way the road continues on to make you curious and spark your imagination as to where it leads.  Hubby named it, “The Next Adventure.”  I like it.

The above photo was also chosen and I like it because of the pretty location, the water, the smooth rocks and the fall colors.  I like how the log grabs your eye and sends it up to the yellow foliage and then back down the water again, so you really end up looking and following through the photo.

The Judge did have a very different taste than I do, he actually did not include some gorgeous photos that I was immediately attracted to because they looked “too much like a post card.”  Strange.  I often think of my photos as if they were postcards… Would I grab one and pull it off the shelf to buy?  He liked more abstract things with lines and I noticed he loved movement or implied movement while a couple he chose for awards looked blurred to me, he liked the blur.  Funny how different people can be with their tastes.

So, I at least made it in to the showing which is my award.  I’m looking forward to seeing them hanging in the gallery next to all the great photographs.

And, for the one that didn’t make the cut:

It’s okay though, I was expecting it not to, or else this one to make it and the other two not to.  But it is a personal favorite of mine for many personal reasons… It will continue to hang in my house.

Posted in Me, Photography

I’ve been meaning to put a few pieces in to our local gallery for the past few years.  I’ve just never “gotten around to it” and often find that as an excuse for things I’m not so sure of.  But recently my Great Aunt Joan was visiting and she definitely has the gift of encouragement and lit a fire under me to get some pieces in.  So, I’ve entered three photographs in to the Highland Art Center’s annual juried photography show.

I went to drop off the pictures yesterday and of course, picked the poor lady’s brain; “What happens if my photos aren’t selected, will I get a call?  What exactly will the judge be looking for when selecting pieces to be exhibited?  Should I bother coming to the critique at 3 pm on Tuesday?”  Gulp… She highly recommended going to the critique.  While I believe it will be a very good learning experience, I am a bit nervous to hear what the judge has to say about my photos.  I know I get a lot of people saying how pretty they are and how good of a photographer I am but… now I’ve put myself in to the group of people who show and I’m having a hard time thinking of myself as good enough to show.  I think I’ve moved “those types” up on the pedestal so high that I don’t think it’s an attainable position. 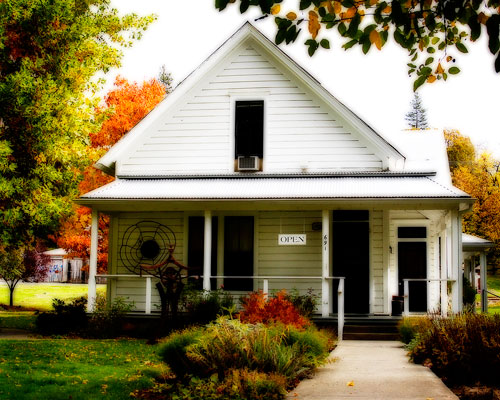 But, even if they weren’t selected, I’ll let you all know and post the photos I put in anyway.  And, I’ll just have to enjoy visiting this cute little building and hearing what the judge has to say about all of the photographs that were selected… So, I’ll be back later on to tell you all how it went.  Wish me luck!

Posted in Me, Photography