I’ve had a few more products to give away from Eco Store but wanted to try them out a little further before passing them on to you… No, that doesn’t mean you’ll receive my half-used products but totally new and un-opened!

I have really enjoyed using this product.  I do have to say that it probably isn’t as good as old fashioned bleach, but I actually have a small problem with old fashioned bleach.  For one, it isn’t very good for my septic system and the micro-organisms that keep it ticking and two, I have fairly sensitive skin which has problems when I use the stuff too much when I clean… Though this Pure Oxygen Whitener is only for your laundry, it is still nice to have a more natural approach to whitening.

Pure Oxygen Whitener is made by Eco Store, a New Zealand based company who have recently moved to the States as well.  Their slogan is “No Nasty Chemicals,” and thus everything they make is safe, biodegradable and plant based from sustainable resources.  To look them and the products they produce up, visit at www.ecostore.co.nz or www.ecostoreusa.com where I received my products.

To answer this giveaway please leave a comment and state the answer to my question about you, “If you could learn how to do anything, what would it be?”

One entry per person please, a random number picked by Hubby will be chosen on Friday, April 3, 2009.

Today was a pretty quiet day for Annie and I.  Hubby is away on business so we’re holding down the fort, though that’s not all that bad considering we’ve got a lot of family and friends around to help if there arises such a need.  But we spent most the day outside to Annie’s request.  I was happy to oblige since our weather is around 70 degrees!  The daffodils are starting to pop and so are our fruit trees. 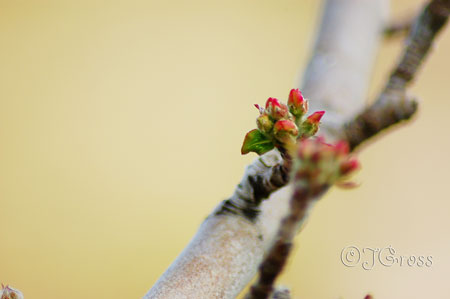 Last year the fruit trees popped and were quickly fried by the frost.  We had absolutely no fruit last year, not an apple.  It was quiet depressing and we’re hoping that the frost will hold off until the blossoms are done or the blossoms will just freeze in time (not in temperature) and hold out for better days.  Looks like they’re determined to open.

Our last load of hay came in the day before yesterday.  We have ten ton of hay sitting out there by our driveway.  We feed about a bale and five flakes per feeding so we tend to go through it pretty quickly.  The good thing is that our grass will start coming in good now, as long as we continue to get rain… Better get the tarp on!  Actually, maybe I’ll leave it off, then the rain will be more apt to come! 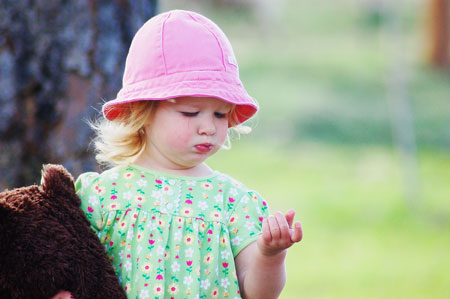 Annie has found out that hay is fun to chew on, you may see a very small sprig sticking out of her lips there.  She had also picked a dandy lion blossom and is inspecting it in her hand.

You can tell this picture was taken after she got up from her afternoon nap… The bear still in hand.  He’s a very important feature at nap and night-night time… She’s had him since she was a little smaller than him!  Now she can carry him around in a death grip.

One of her favorite past times is looking around at what she can find floating in the stock tanks.  This girl is fascinated with water and looks like she’s found a very interesting piece of moss that fell out of our many oak trees. 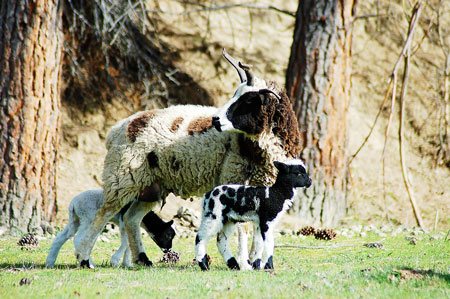 And, an updated picture of our most recently born lambs.  This is Mud Ranch’s Winifred aka “Winny” and her two girls sired by Kenleigh’s Raider, Gwyneth & Joanne.  I named them both after my friend Glenna and I… Glenna get’s her named commonly messed up by other people and they call her Gwyneth… People call me Joanne on accident and both of those names drive Glenna and I crazy.  So, thus these little girls… They aren’t meant to be given bad names but more of a reminder of funny discussions between a girlfriend and I.

And the very handsome Mud Ranch’s Ford is developing very nicely.  This picture taken today… His four horns are starting to stick out!  I love this guy’s look and am hoping to show him at the Black Sheep Gathering in June!

Have a nice Friday!